skip to main | skip to sidebar

Why Sam Harris is a moron, Part 1: Islamophobia

It is hard to know where to begin, with Sam Harris. He is so addled, that it's going to take multiple posts to describe just how addled he is. Let's start with Islamophobia.

When I recently asked Sam Harris what he thought of the word 'Islamophobia,' he directed me to a tweet that noted the following: “Islamophobia. A word created by fascists, & used by cowards, to manipulate morons.”

“I don’t think [the tweet] overstates the case by much,” said Harris

Arachnophobia: In a basic sense, arachnophobia is an irrational fear, or hatred, of spiders. Yes, some spiders are very dangerous, and some will try to kill you. But, to have a fear of all spiders is quite irrational.

Islamophobia: Likewise, an irrational fear, or hatred, of Muslims, or anything Islamic. Yes, some Muslims are very dangerous, and some will try to kill you. But, to have a fear of all Muslims is quite irrational.

To argue that there are no people that have an irrational fear of all Muslims, or anything Islamic, is utter nonsense. Even if only one person in the world was afflicted with it, it would still be a thing. People standing outside a mosque with automatic weapons aren't doing it out of bravery. They're doing it out of fear. These tough guys, can actually be considered chicken shits. They're truly scared to death. 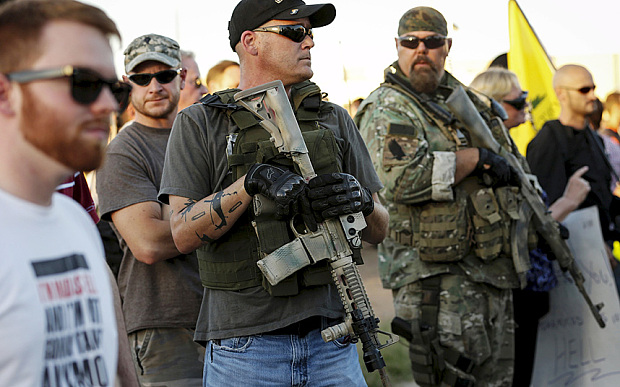 Another way to look at is that, like racism and sexism are specific kinds of bigotry, a number of phobias can be seen as specific kinds of xenophobia. Some specific things seem so strange, or foreign, to some people's minds, that they form an irrational fear, or hatred, of it.

Xenophobia: an unreasonable fear or hatred of foreigners or strangers or of that which is foreign or strange

Homophobia: an unreasonable fear or hatred of homosexuals or of that which has to do with homosexuality

Judeophobia: an unreasonable fear or hatred of Jews or of that which has to do with Judaism or anything Jewish

Islamophobia: an unreasonable fear or hatred of Muslims or of that which has to do with Islam or anything Islamic

For Sam Harris to just outright deny the existence of Islamophobia indicates he's somewhat of a moron, who fails at his own speciality, neuroscience.

So, could Sam, himself, be considered to have an irrational fear of Muslims, or anything Islamic?

On the one hand, Sam does sometimes differentiate between Jihadists, Islamists, Muslims, etc., in some of his writing. Where Sam seems to have a problem, as many other people do, is differentiating between a religion and a holy book. A book is not a religion.

"My honest view is that Islam is not a religion of war or of peace - it's a religion. Its sacred scripture, like those of other religions, contains passages that many people would consider extremely problematic. Likewise, all scriptures contain passages that are innocuous. Religion doesn't inherently speak for itself; no scripture, no book, no piece of writing has its own voice. I subscribe to this view whether I'm interpreting Shakespeare or interpreting religious scripture." ~ Maajid Nawaz

It seems somewhat ironic that non-believers have been pointing out contradictions in religious texts, for centuries, yet now we have some coming along and claiming there is one correct way to interpret those religious writings. Even more ironic, is that he helps promote that the extremists' interpretation of Islam is the correct form of Islam, rather than promoting the most moderate interpretation possible. Sam just helps Islamists and Jihadists argue that theirs is the "true" Islam.

Constantly expressing his interpretation of the Qur'an as the more correct Islam would suggest that we should be afraid of every Muslim. Whether, or not, he has the phobia himself, he sure as hell does his best to help spread irrational fear.

Sam, himself, admits that anti-Muslim bigotry is a thing, while claiming Islamophobia isn't a thing. The problem here is that, if you take the Islam out of the Muslim, they're no longer Muslim. The actual irrational fear is that all Muslims follow the exact same, horrible, interpretation of Islam. Sam definitely helps spread that irrational fear.

Let's take a look at a few examples from history, as analogies. 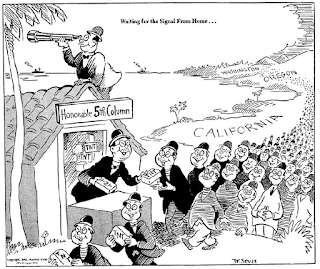 Taking that path, down the road of fear, led to us treating Japanese citizens absolutely horribly. Now, I know Sam's version of utilitarian morality allows for torture, so he may think this was reasonable, but I think it was a deplorable way to treat our own citizens. Even if the majority of Japanese people in the world were against us, punishing those who did no wrong was, in my opinion, immoral. Of course, my morality is only subjective, or relative. I don't have science based "objective" morality, like Sam (that'll be Part 2).

Another point in history we can look at is the early years of the Cold War. Even if one could say that the USSR, and their brand of communism, were some kind of threat to the United States, an irrational fear of everything to do with socialism/communism led to treating people horribly. People were spied on by the government, encouraged to spy on each other, people were blacklisted, interrogated, imprisoned, banished, etc. It was a terrible way to treat people.

Not only did it lead to people turning on each other, but it led to bomb shelters, and a constant state of fear of nuclear war. It was emotional abuse, for the government to bombard people with so much fear, and hate, mongering. 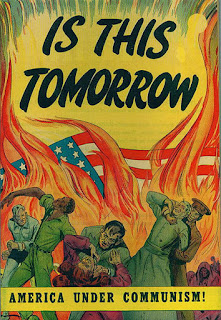 I'll Godwin myself here, as I point to another example. The Nazi party took their fear of communism even further. Hitler blamed an entire religious group, Jews, for communism. This is very much comparable to blaming an entire religious group, Muslims, for religious extremism. Now, I'm not saying Sam is about to throw people into ovens, here. However, the 1920s and 1930s propaganda, put out by the Nazis, may not have seemed too bad to some people, at the time. They may have considered it rational criticism of the Jews. They may have considered some of it just harmless cartoons. 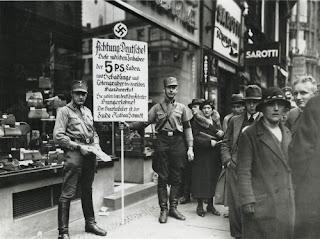 Those guys don't even look as threatening as the first guys, above. Just innocently boycotting Jewish establishments, expressing their freedom of speech, and handing out some flyers. No big deal.

So, what is Islam?

Historically, Muslims have indeed allowed for other ideas to be incorporate into their beliefs, so have been practised a more moderate form of Islam. Many of the problems we're seeing today, in certain parts of the world, were results of our own (Western civilization) actions.

Syria, had a democratically elected government. They voted against an oil pipeline. The US backed a coup, to get them out. Iran, had a democratically elected Prime Minister. He wanted to nationalize Iran's oil. The US and UK backed a coup, to get him out. These people are demonstrating, in favour of nationalizing the oil, in 1953, before the coup. 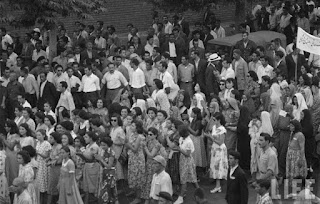 Iraq had a populist leader, who had just overthrown the British puppet dictator. He was talking about nationalizing Iraq's oil. The US backed a coup, to take him out, and install the Ba'ath party. When Saddam later also decided to nationalize Iraq's oil, the US and Israel encouraged a Kurdish uprising. When their puppet Shah fell, the US then turned to help Saddam, who used Western weaponry against the Kurds, and then started a war with Iran.

In Afghanistan, a communist party, friendly to the USSR, ousted the Afghan King, and the US immediately started backing Jihadists, to help draw the USSR into their own Vietnam. Cabul, in the 1970s, before the Jihadists took over. 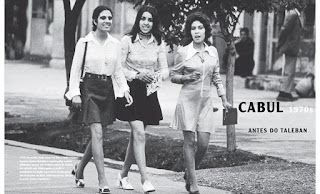 Now, imagine that you were trying to overthrow the United States and, in an effort to do that, you made a deal with a bunch of their ultra conservative, 2nd amendment preaching, gun-toating, evangelical Christian, private militia types, to get them to help you. Then, after the war, you carve up the US and put those people in charge of various smaller countries. That is, basically, what happened with parts of the Ottoman Empire.

And, of course, there is what was done in Palestine.

The point being, that a more conservative, Islamist form of Islam, coming to power in many places, is not entirely the fault of Islam itself. Now, so I don't get straw manned, as Harris, and his supporters, are oft to do, I'm not saying that more radical extremist Muslims didn't exist, before Western interventions. I'm saying that, if you're going to remove the moderates from power, and help suppress them when they're not in power, then you're helping make a more ultra-conservative form of Islam become more dominant.

Every situation should be evaluated on its own. Blanket statements about how horrible Islam is, aren't very helpful. It is not helpful to support women by telling any oppressive rulers that they are practising the correct form of Islam. It is not helpful to tell the women that any oppression or mistreatment they're experiencing is the fault of their own religious beliefs. Tossing groups like Hezbollah in with groups like Al Qaeda, and talking about them as if they're the same thing, also not helpful, and fairly dishonest. Especially in, and around, Israel, there are some valid grievances that need addressing.