skip to main | skip to sidebar

Contrary to what we suspect she intended to convey with her statement — "I'm not an atheist. I'm an agnostic" — it actually translates to, "I believe in God, although I don't think we can ever prove that he exists".

This is a straw man. The authors, John L. Ateo, and Rachel C., apparently don't comprehend English. They quote Helen Clark, who used some specific language..."no religious convictions", "no opinion to offer", "do not affirm", "leave the question open", and "why bother". Even with all that descriptive language, the moronic authors get tripped up in comprehension, simply because she says "I'm not an atheist" and "I'm an agnostic". It seems fairly obvious that, like many people, Helen Clark is using a narrow definition of "atheism" and a broad definition of "agnosticism". She even clearly told them what definition of "atheism" she was using, by stating "deny flatly the existence of God, or that supernatural forces play any part in the universe".

No doubt some will claim that we have given too broad a definition of atheism, one that only appears to provide two options. This is because a large proportion of the population, especially those of a religious persuasion, believe that atheism really means:

"The belief that God or gods do not exist".

Unfortunately a large proportion of the population are mistaken.

Oh, I see, the authors are tripped up because they are dogmatic in their belief that there is only one definition for "atheism", and that everyone else is using the word improperly. Well, a couple of somebodies need to read some dictionaries:

one who believes that there is no deity

1. a person who denies or disbelieves the existence of a supreme being or beings.

Disbelief in or denial of the existence of God or gods.

someone who believes that God does not exist

someone who believes that God does not exist

a person who believes that God does not exist

a person who believes that God does not exist


Apparently, unbeknownst to the authors, the word "atheist" does have more than one definition. Anyone using the narrow definition, is NOT using the word improperly. The only improperness going on is them misleading their readers. That they're arguing an easily verifiable error, with such absolute certainty, makes them look like absolute idiots.

Move towards the middle of the spectrum and you have atheists who definitely understand the concept of gods but quickly decide that they don't believe in them.

The real meaning of Agnosticism

Now the authors finally decide to break out a dictionary...just one though...to provide a single narrow definition of "agnosticism". Let's see if we check multiple sources:

broadly : one who is not committed to believing in either the existence or the nonexistence of God or a god

One who is skeptical about the existence of God but does not profess true atheism. 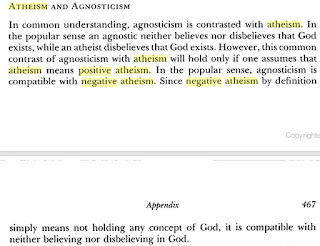 The Oxford Handbook of Atheism


And, of course, we actually have the primary source for agnosticism...Huxley's own writings. Apparently, unbeknownst to the authors, the word "agnosticism" also has more than one definition.

To show how totally ignorant they are about agnosticism, the authors conclude...

We have tried to show that on the belief spectrum there are only theists and atheists, believers and non-believers. Thus the concept of agnosticism, a mythical land between the two is just that, mythical.